Our shipping department will be CLOSED until Feb 14.  All orders will be shipped when we return.  Our Cordova Store will remain open.

We pay tribute to our origins by showcasing Alaska’s wealth of indigenous cultures, as well as it’s spectacular flora and fauna into our signature trim designs. Commissioned from local artists who designed these trims exclusively for Copper River Fleece, this woven artwork can only be found on Copper River Fleece garments and accessories.

As you scroll through the following samples of our trademark trims, click on any image to view additional color versions in each design which we‘ve created to compliment our spectrum of fabric colors.

Celebrating dog-sledding, the "Race is On" trim was designed exclusively for Copper River Fleece by Cordova, Alaska artist Susan Ogle, in collaboration with Libby Riddles, the first woman to win the Iditarod Sled Dog Race. For centuries, using sled dogs for transportation & hauling supplies was a traditional way of life for the Alaska Native people of the north. Over hundreds of years, they bred dogs which had the strength & endurance to pull heavy sleds, and the thick coat needed to withstand the Arctic winters. Sled dog racing, which began in the Gold Rush days, became the official state sport of Alaska in 1972. Distance races such as Iditarod & Yukon Quest, and sprint races such as Fur Rendezvous, are some of the many sled dog races keeping this Alaskan tradition going strong! 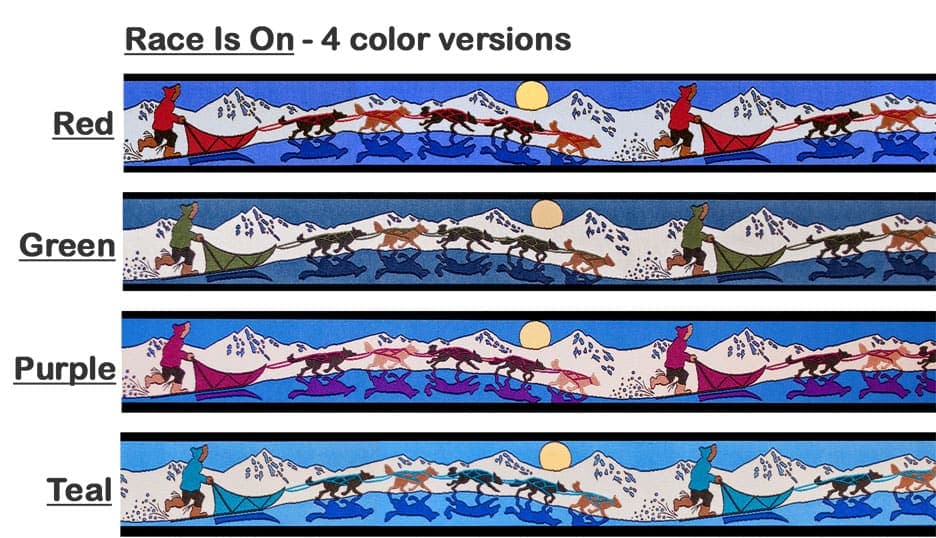 The town of Cordova is built on the abundance of wild Copper River Salmon. A delicate and carefully guarded balance exists between the harvesting of Salmon and the respect and protection of this life-source. Inspired by these influences, Mike designed this trim portraying a fusion of Tlingit and Haida-style salmon, jumping and flipping between bear tracks. Note the distinct characteristics of each fish: the bellybone, backbone, and tail designs, the teeth and hooked nose of a mature male, and the traditional Tlingit symbols woven into each fish - U and S shapes, ovoids, and circles. The essence of Cordova's very spirit, Copper River Salmon make a splash wherever they appear... in the fishing net, on the dinner table, or accenting our clothing! 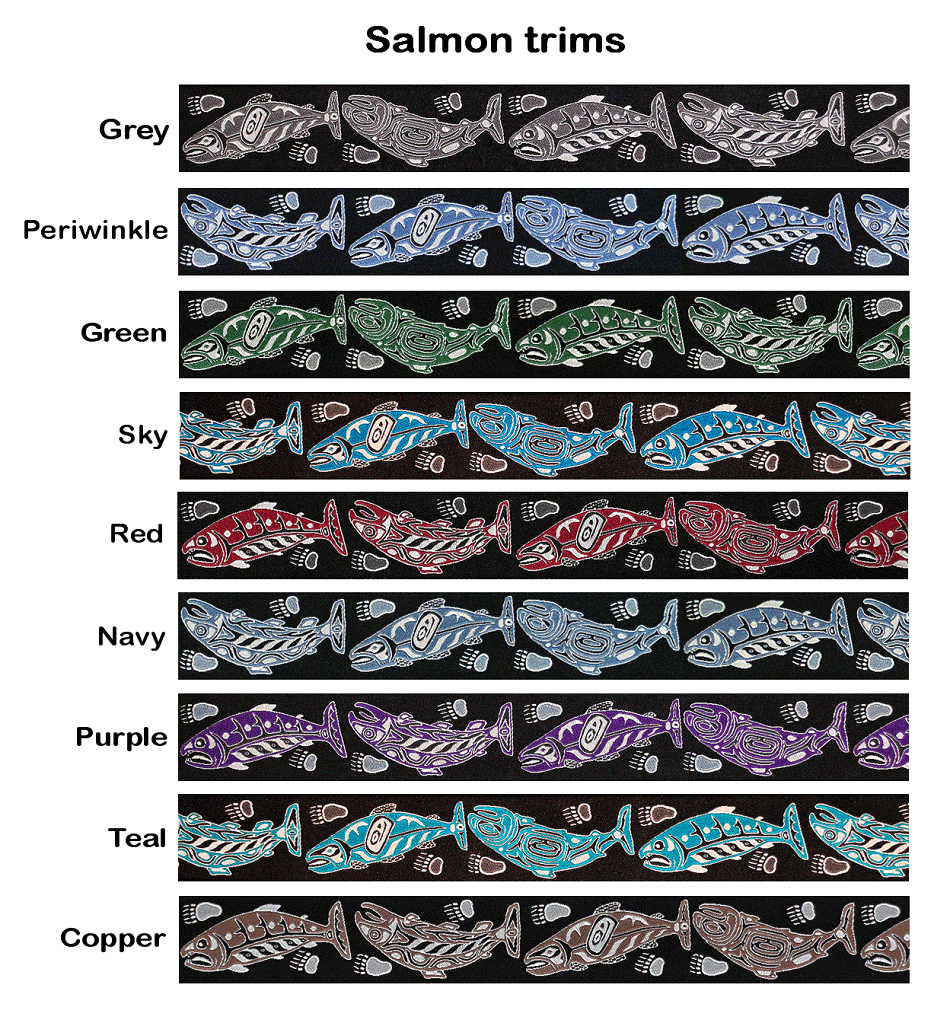 Emblazoned with the Eagle, Raven, Killer Whale, and Beaver Clans' crests, this trim tells the story of traditional Tlingit influences stretching from Southeast Alaska to the Copper River.  As Mike explains, "The Eagle and Raven are positioned in the center, representing their status as the largest and most powerful clans. Talon, wing, and human head forms surround the Eagle, in accordance with traditional Tlingit design.  Known as the Wise One, the Raven is believed to have created the earth, sun, moon, animals, and all other life forms.  Tying the sea to the land and its people, the Killer Whale meshes fins, tail, and human form.  The Beaver Clan was known for its powerful chiefs and shamans, whose strength is evident in the oversized incisors, tail, and beaver head."  In this vibrant trim, Mike brilliantly weaves ancestral totems of Tlingit culture, handed down through generations. 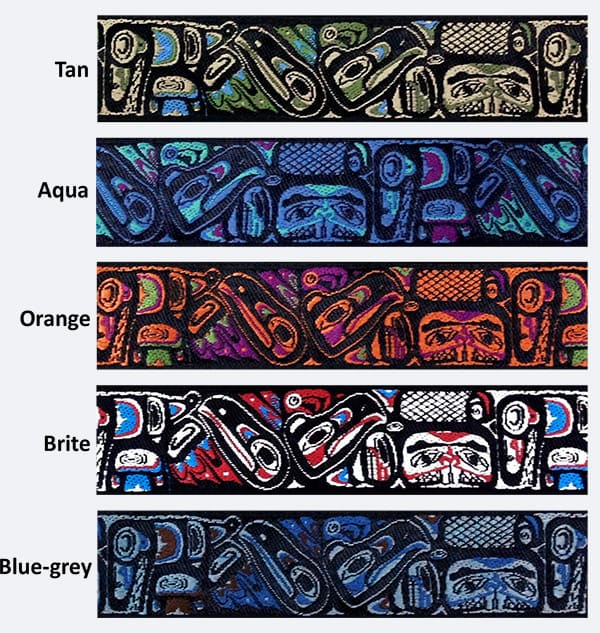 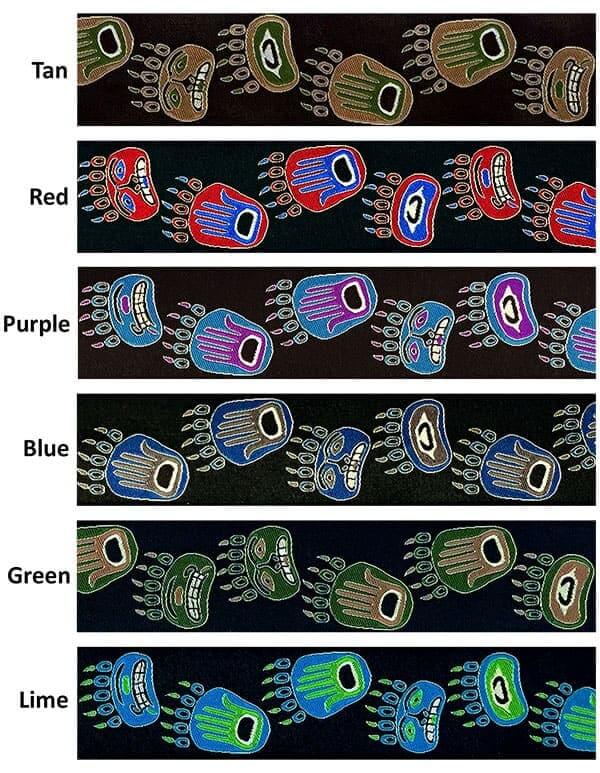 Bear Tracks are a frequent, yet always awe-inspiring sight on the Copper River Delta and beaches of Prince William Sound. There is a magnificence and symmetry to their footprints in the sand that rings deep for all cultures, for all times. For the Tlingit, Eyak, and Sugpiaq (Alutiiq) of Alaska’s “Lost Coast”, the bear has figured prominently into the spiritual, oral, and artistic traditions. As hunters and outdoorsmen, these tribes are aware of the close similarities in the anatomy and behavior of the bear and human. The union of human and bear is a common thread throughout indigenous Alaska, as signified on the trim by the hand inside of the paw. The shaman sought the bear’s help and women ran away to marry the bear in oral stories. You will see a woman’s face, distinguished by a labret, in one of the bear paws and a profile of a human in another paw. In another paw, the crescent eye represents the “sleeping eye” or hibernation cycle of the bear. 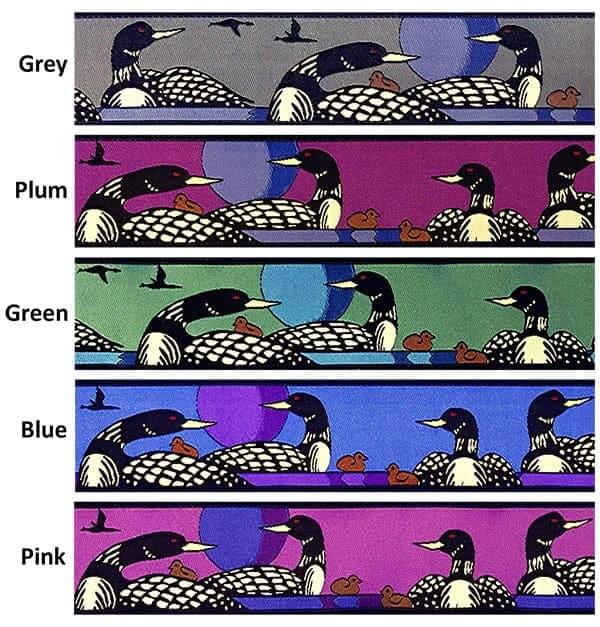 The largest and rarest of all loon species, with a wingspan of up to 5 feet, the Yellow-billed Loon is an expert swimmer and fish-eater, capable of diving over 200 feet deep. Breeding for life with the same mate, both parents help to incubate the eggs and raise the chicks, which often ride on their parent’s back to stay warm. A candidate for the Endangered Species List, it is also red-listed on Audubon Alaska’s WatchList as a species whose populations appear to be declining. In Arctic Alaska, they breed primarily on the shores of the Teshekpuk Lake, the largest freshwater lake on Alaska’s North Slope. We encourage you to learn more about this species and the threats to its continued survival at www.AudubonAlaska.org and to support Audubon Alaska’s mission of conserving the spectacular natural ecosystems of The Last Frontier. Showcasing the Yellow-billed Loon, this trim was designed exclusively for Copper River Fleece by Cordova, Alaska artist Susan Ogle. We hope that in featuring Susan’s beautiful artwork on our garments, we can help raise awareness of the natural wonders and the delicate balance of our unique surroundings.

Alaska's diverse inhabitants include the largest population of brown bears in North America, with an average coastal density of 1 per square mile! Distinguishable in part by their dish-shaped face & sizeable shoulder hump (a mass of muscle helping to power their front legs), these awe-inspiring creatures can reach weights exceeding 1000 lbs. Feeding on the abundance of salmon, berries, & lush vegetation, brown bears living on Alaska's central & southern coasts grow significantly bigger than their inland cousins. In preparation for the long winter months they will spend in hibernation, these coastal brown bears can consume up to 90 lbs of food per day. Designed exclusively for Copper River Fleece by Cordova, Alaska artist Susan Ogle, this trim is named after one of the most unique places in the world to watch these feeding giants: Brooks Falls in Alaska’s Katmai National Park, where unusually large gatherings of brown bears congregate to feast on migrating salmon jumping up the falls. Masterful fisherman, these bears display a variety of fishing styles and techniques, which are typically passed down from mother to cub. 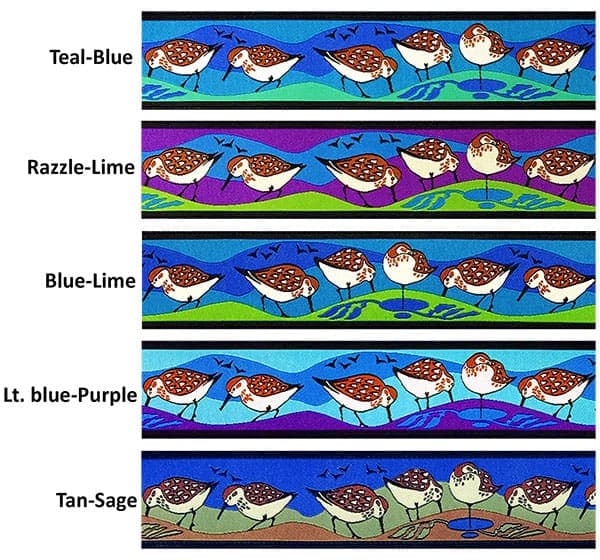 This unique trim, commissioned by Copper River Fleece, is our way of introducing two Cordova, Alaska sensations: artist Susan Ogle and one of our natural wonders, the largest migration of shorebirds in the world! During the first weeks of May, millions of migrating birds such as these Western Sandpipers arrive in Cordova to rest and feed on the aquatic insects, small crustaceans, and mollusks found in the rich Copper River Delta mud. Having wintered as far south as Mexico and Peru, they spend several days in Cordova on the final leg of their annual migration to the nesting grounds in northwestern Alaska. Weighing less than 1 oz., the Western Sandpiper measures 6-7” in length and is one of the most abundant shorebirds in the U.S. One of the great delights to birders watching these feeding flocks is when a group of as many as 10,000 birds rise up in mass, swooping and diving in unison, to create an “Avian Aurora”!

One of the most recognizable sea birds in Alaska is the Horned Puffin. With it's distinctive clown face, accentuated by a red & yellow beak, this tropical-looking seabird was often called "sea parrot" by early explorers. Horned Puffins are master swimmers & divers, spending most of their lives on the open sea. They fly up to 55 mph by beating their wings as fast as 7 beats per second, giving them the appearance of black & white flying footballs! Found primarily in Gulf of Alaska and Bering Sea coastal waters, they eat small fish and are often seen in-flight, carrying stacks of multiple fish in their bills. Breeding in deep underground burrows or in pockets along cliff faces, each spring produces a single chick by parents who mate for life. Populations are currently stable, but their limited distribution makes them vulnerable to human disturbance and changing climate. Visit www.AudubonAlaska.org to learn more about this fascinating species. 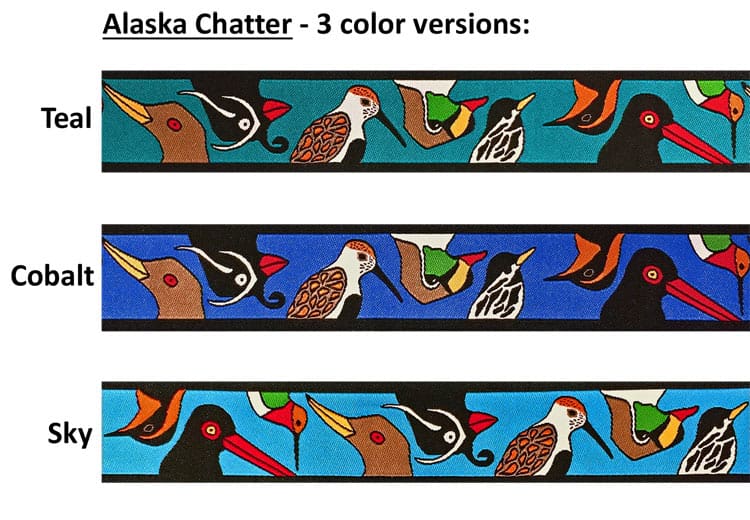 The "Alaska Chatter" trim features some of the vast, diverse, and intriguing bird species which breed in Alaska and can be found throughout the state; from the sea, to the forests, to the tundra. With the exception of the Rufous Hummingbird, all of the species shown here (Whiskered Auklet, King Eider, Black Poll Warbler, Dunlin, Varied Thrush, Black Oystercatcher, Yellow-billed Loon) are listed on Audubon Alaska’s WatchList as species whose populations are vulnerable, and in some cases declining. To learn more about these species, and about efforts to help ensure their continued survival, please visit www.AudubonAlaska.org

Coastal Alaska is home to 90% of the world's sea otters! Among the most frequently sighted marine mammals along the shores of Cordova and Prince William Sound, they are social and playful, spending much of their time floating together in groups called "rafts".      Sea otter pups, unable to swim during their first weeks of life, are carried on their mother’s stomach. To avoid drifting when resting, sea otters will anchor themselves to kelp. They can often be seen using a rock on their chest to crack open a meal of shellfish while floating on their backs. With up to 1 million hairs per square inch, sea otters have the thickest fur in the animal kingdom. Unlike other marine mammals, they do not have a layer of blubber, so they must rely on their dense coat and a high metabolism to keep warm…..which is why the sea otter must eat 25-30% of it's body weight in food every day! In the 19th century, sea otters were hunted into near extinction. However, as a result of conservation efforts and protection under the Endangered Species Act, their populations are on the rebound.